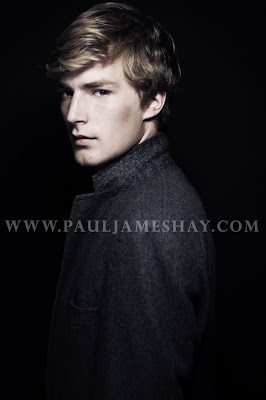 I have a very dear friend Darien Mynarski that was working with me in Hamburg as a stylist.
I remember the day well that he came over with his drag bags of clothes to shoot a girl. Darien is an incredible creation of the universe and my words can not explain his fervor. With his massive Roberto Cavalli glasses and his full length major fur coat with his Hermes scarf neatly rappped around his neck Darien arrived flittering through the frond door and said, (quote) "Paul, YOU CANT IMAGINnnnnnnn ahhhhhh I have met an angle" Beautiful YOU CANT imagine ! " Pauuuul I gave him your card.
So Darien meets Kim Fabian Von Dall'Armi on the train. Kim calls the number on the card and Kim comes in to PMA. Now I am not a long hair guy at all. Boys with long hair just dont thrill me so Kim was around a while before I took him under my wing. He did a cool job for Tush magazine but it was not until he had a serious hair cut that I picked up the Camera. We did a small test shoot before I left for Australiain 08 but he was still just not there. I wanted to wait with him a little longer. In the summer of 09 he came around to the studio and I gave him another new hair cut. The Photo above was the first shot from that day. Oliver, one of my bosses at PMA was extremely exsited about the test and Kim. We decided send the test to Patsy form Success in Paris. Success took him on and the rest is history. Kim booked the Prada show exclusive and also opened the show. He has done Another magazine, Bon Magazine, Arena plus Homme and has several impressive options coming up that I would not even dare to mention.
The part of my job that I love the most is the personal management. The collaboration with other agents around the world. To take a teen from a train and tack there photos and bringing them to life.
Posted by Paul James Hay at 1:31 AM